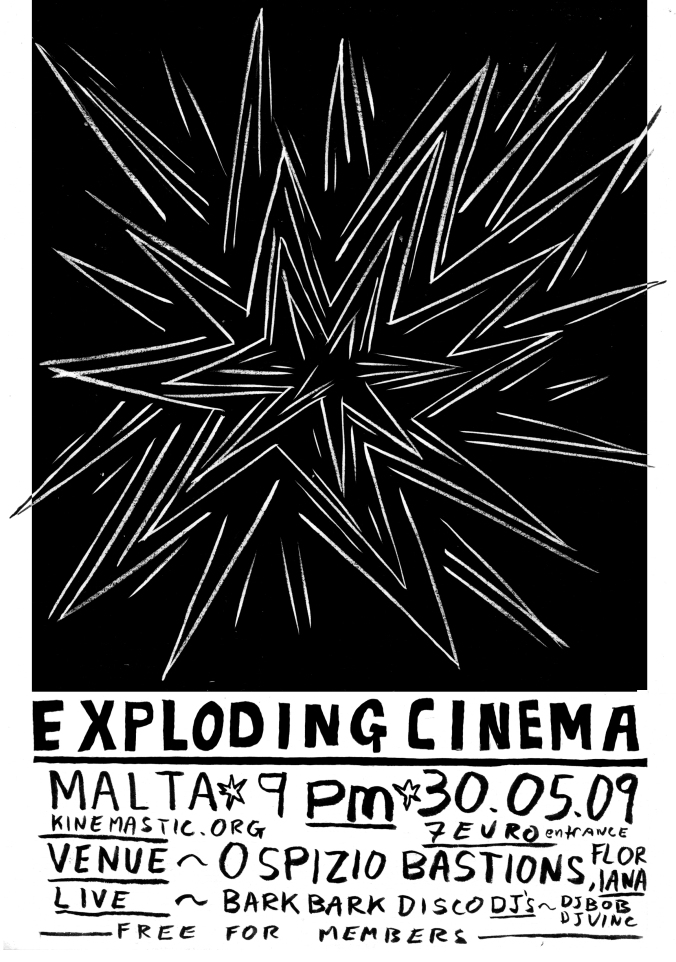 Exploding Cinema will be in Malta on Saturday 30th May for a one night only show organised by local NGO
Kinemastik.

Founded 16 years ago in the disused ‘Cooltan’ suntan oil factory in Brixton by a collective of media
outsiders seeking to stage their own screenings of isolated and disenfranchised media, Exploding Cinema
has since screened more than fifteen hundred unfunded films.

Attending an Exploding Cinema event is an unspoken rite of passage to underground cinema. Following in
their tracks, since the early nineties a No Wave of cinema groups has emerged, including, Omsk and Kinokulture the group Films That Make You Go Hmmmm, The Halloween Society and many others.

The EXPLODING is also a key organiser of the VOLCANO!!! Underground Film Festival (1996-2000) an annual event in which most of the London Underground film groups come together for two weeks to stage a London wide multi venue celebration of low/no budget underground film and video.

Exploding Cinema have collaborated with various other international underground film festivals and toured
with other film groups such as Kino Trotter from Belgium and Filmgruppe Chaos from Germany, who also
came to Malta through Kinemastik in 2007.

Exploding Cinema is voluntary and democratic; anyone can contribute and anyone can join. The group is
non-profit making, all work is voluntary, no wages are paid and all the money made is used to run
screenings and to buy collectively owned equipment.
Local NGO Kinemastik will be hosting an event featuring Exploding Cinema on Saturday 30th May at the
Ospizio in Floriana.

Bark Bark Disco will have their debut concert right after the screening followed by DJ Bob and DJ Vinc on decks or something else.